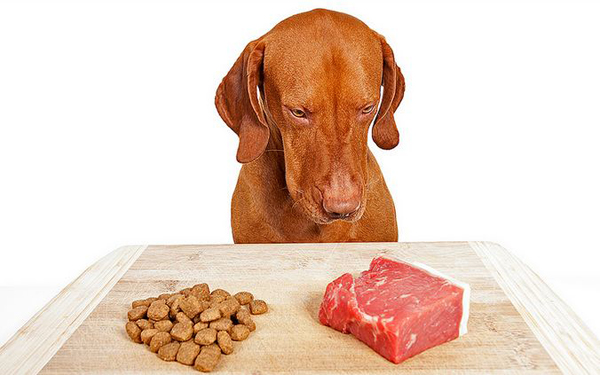 Raw Food Diets are becoming increasingly popular in Australia. At AAH we strive to practice evidence based medicine and as this is a commonly occurring question for pet owners, I thought I would collate some of the current research that is available on raw foods.

Why is it popular?

There are a few websites which advocate this kind of diet. Most of these diets consist of raw muscle meat, bones, fat, organ meat and some vegetable matter. The rationale for this kind of feeding schedule is that “A biologically appropriate diet for a dog is one that consists of raw whole foods similar to those eaten by the dog’s wild ancestors.” This kind of statement is accompanied by suggestions that such a diet will provide maximum health for a dog while kibble based diets “cause innumerable health problems”.

There are examples of some dogs who have definitely benefited from a switch to raw diets;

Dogs in the last two groups probably have intolerances to ingredients in commercial diets not found in home prepared foods.

Some of the claims sound attractive to owners, such as “Eating bones for a dog is a joyous experience. It is so enjoyed by dogs that it actually of itself boosts their immune system.” Unfortunately, there are no references to scientific studies to support any of these claims.

So, what are the issues with raw food diets?

There are 2 main issues,

There is a universal consensus among veterinarians that raw animal products are unsafe and that cooking was the best way to rid the foods of pathogens. Typical of this is a report by the American Veterinary Medical Association (AVMA) [click here (link is external) to see that report].

In America the US Food and Drug Administration (FDA) Center for Veterinary Medicine tested over 1000 samples of pet food for bacteria that can cause foodborne illnesses. They were specifically interested in the bacteria which causes salmonella and listeria. Their results were quite clear. Salmonella appeared in 7.6% of the samples of raw food (that’s one out of every 13 samples tested) and the bacteria for listeria was more than twice as likely to be present, totaling 16% of the samples tested (which is approximately one out of every seven samples). These bacteria did not appear in any of the samples of other dog food tested whether it was dry dog food, semi-moist dog food, or jerky type treats — that is 0% of the other samples. (You can read more about this if you click here (link is external)).

In Australia around 38.8% of any fresh poultry sold for human consumption is contaminated with Salmonella. It won’t be any lower in pet food store products. Dogs and cats actually hardly show any signs, but it’s very serious in young humans who can pick it up from their furry siblings (mouth, dog bowl, faeces etc)

Further to this, the recently published article which links infection with campylobacter (a bacteria found on about 60% of raw chicken in Australia – similar to the rest of the world) with an increased risk of an immune-mediated paralysis, acute polyradiculoneuritis (APN). Just to clarify, this does not mean that if you feed your dog chicken necks, they will get APN, just that they have an increased risk of developing this condition above that of a dog that does not eat raw chicken.

2. Diet’s need to be well designed in order to provide complete nutrition;

A well-designed raw diet is likely to be at least equal to feeding a complete and balanced commercial diet. But the key word is well-designed. The complexity of nutrition means it’s easy to make mistakes, and not relatively minor matter like whether the diet has grains or not. It is essential for young puppies and kittens to have a complete diet as it can have long term effects on their growth and development. Diets need a very precise ratio of calcium to phosphorus. Both too high or too low have their own negative effect on bone development. And this even varies between breeds, as large breed dogs need a different puppy diet to small breeds.

How to Make Raw Diets Safer

I’m very comfortable that dogs on well-made raw diets are healthy but costs and inconvenience are a factor. For the majority of dog and cat owners, commercial foods are a safe and reliable base for good nutrition. For those that prefer to use raw diets, it’s important to accept a higher risk if you go it alone.

Here are some easy ways to reduce the chances of harm

Tests on Australian meats at the retail level show that lamb and beef have a Salmonella contamination rate of only 0.1 to 0.6%. That’s not zero, but it’s a lot better than 38%. Our meat inspection and hygiene system generally works well, just not for chicken. Raw mince is also more likely to be hazardous and is best avoided too. Campylobacter (the bug linked to APN) is also found almost exclusively on chicken.

Commercial raw BARF diets utilising poultry have been shown to be contaminated by Salmonella as well.

On the raw food company websites I can’t find any that test their batches for microbial contamination. The low Salmonella figures above only relate to meats from your local butcher or supermarket. The whole human supply chain from farm to you is tightly regulated, as opposed to pet food. You should use only quality meats, adhere to best before dates and practice strict hygiene.

As mentioned earlier, growing animals are at much higher risk if the diet isn’t balanced. Adults can be a lot more flexible without harm.

Too many raw diets are essentially just meat and treat diets. That’s not good. They need some calcium and phosphorus as well as some carbohydrates. I would add rice, but if you don’t want to use grains, try pumpkin, carrot, peas or sweet potato. You can also add fruits except for grapes.

There are cats that seem to manage to get by on mainly raw chicken necks but it’s not safe enough for me so a good compromise would be to give cats at least 50% commercial food just as a safety net for all their odd requirements.

Despite the popularity of coconut oil in human nutrition, vets advise against its use in dogs. Addition of any fats or oils to diets will inevitably increase the risk of pancreatitis.

In conclusion, I would also like to say a word about vets and conflicts of interest. Much has been said about vets selling the same foods they recommend. At AAH we mainly sell prescription diets for animals who have, often very serious, medical conditions. If someone wants a certain normal food we can order it in, but we don’t push sales, only offer the most current evidence-based advice.

In terms of money making, one of the most widely known raw food diets is BARF, which used to stand for Bones And Raw Food, but has now been rebranded to Biologically Appropriate Raw Food to more suit the carnivorous “wolf” theory. It is a very successful company, and the man behind it also charges for nutrition courses and textbooks that promote this diet. There is money being made on this side also, especially when we love and care for our pets, and genuinely want the best for them.

No one is paying me, or offering any incentives to sell commercial food (and I would not do this for any product without scientific research behind it), and I would say the same of any of the vets at Annandale. Yes, plenty of vets are opposed to raw diets, but they will honestly believe in the advice they give, just as others believe raw diets are great. We can only hope time will tell.

Personally, my own little dog gets about 80% of her diet from a commercial sensitive stomach dry food. The rest is made up of treats from nurse Jackie during the day, and a little bit of leftovers from dinner. I have given her the occasional raw chicken wing, but I usually avoid it as she likes to lick a lot (mainly faces). Asking around the clinic and the diets of every member of staff are a little bit different, so there is no “perfect” diet.